When we heard Pixar had another Toy Story movie in the works, we had both a feeling of excitement and trepidation. We love the entire franchise but felt Toy Story 3 was a perfect way to wrap up the saga. We were really concerned that this film might not live up to the rest of the series. Well, we’re happy to tell you that Toy Story 4 is a more than worthy addition to the toy box.

As you probably remember from Toy Story 3, Andy has grown-up and gone away to college, gifting our favorite toys to a new child; Bonnie. She is getting set to start kindergarten but is very hesitant about this change in her life. All she wants is to stay home and play with Buzz, Jessie and the gang instead of going to a new, scary place where she doesn’t know anyone.

She can’t even bring one of her toys with her for comfort. So, she makes her own; Forky!

Forky, meanwhile, is struggling with his place in the world. He believes he’s just a piece of trash. But Woody knows he’s as important to Bonnie as any toy.

He needs to be protected!

This is made all that more difficult to accomplish when the whole family heads off on a road trip. A journey that will lead the gang into an amazing adventure where they’ll meet both new and old friends.

All of your favorite stars return to their roles and are as amazing as ever. Tom Hanks (Woody), Tim Allen (Buzz Lightyear), Joan Cusack (Jessie), John Ratzenberger (Hamm) and Wallace Shawn (Rex) fall right back into their roles, bringing the heart and humor you’ve come to expect from them.

We are also reintroduced to an old friend that we haven’t seen in awhile; Bo Peep. Annie Potts does a magnificent job returning to play a Bo who has gone through some changes since we last saw her. She’s now a much more streetwise toy with a significant edge.

Toy Story 4 also introduces us to some new friends who all add a lot to the heart and humor of the film.

Tony Hale provides the perfect tone to Forky; the troubled “toy” who was literally born yesterday. 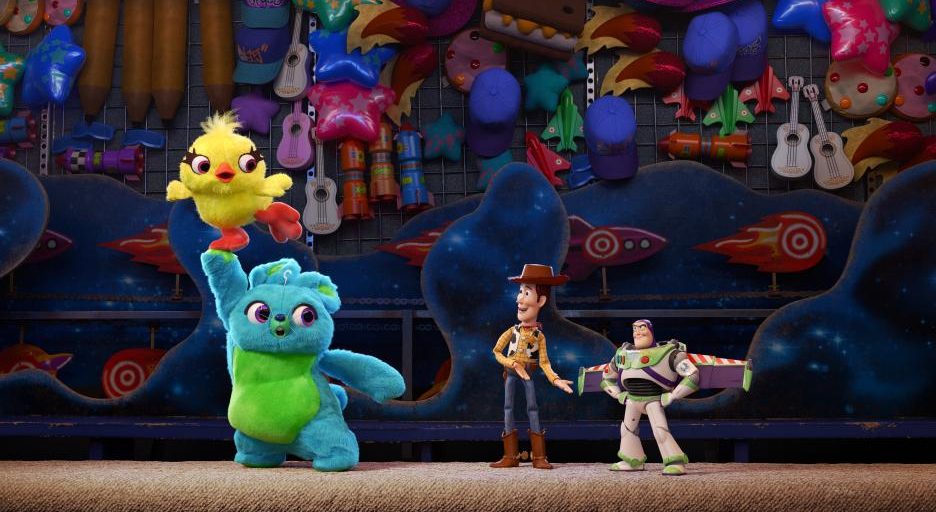 Keegan-Michael Key and Jordan Peele bring their usual irreverent style of humor to Ducky and Bunny; often stealing their scenes.

However, the character who really lit up the screen every time he was on it, was this guy:

Duke was the character we couldn’t keep our eyes off of and the one who provided us with the biggest laughs. Keanu Reeves continues his resurgence with an amazing turn as the Canadian daredevil who poses even better than he rides.

Pixar ups its game with each film and this one is no different. The detail work in Toy Story 4 is amazing. We found ourselves fawning over the amount of diversity in facial expressions the characters were able to showcase. The look was so smooth and so believable. It can almost make you forget, not only that these are toys but also, that they’re even animated characters.

Then there are the easter eggs. Pixar has cleverly placed these in their films since the beginning. Well, they may have more in this movie than in all the other movies combined. We continually found ourselves saying, “oh, look at that one” and “wow, do you remember that”. We found so many throughout this film and we also know there are so many more that we missed. We can’t wait to find them in future viewings.

Toy Story 4 is a wonderful film. It has everything you expect from a Toy Story film; the heart; the humor; the joy. The animation may be the best we’ve seen from a Pixar film. However, it didn’t affect us emotionally in the same way as Toy Story 3.

However, it didn’t provide the giant emotional swings we went through during the previous film.

We’d compare this film more with the original Toy Story or Toy Story 2. There was a lot of heart in both of those films but the focus was more on the adventure and the humor. That’s where this movie excels.

The bottom line is Toy Story 4 is another fantastic addition (and probable conclusion) to a magical franchise. We loved it and can’t wait to see it again and again.

To Infinity and Beyond!

If you liked this review, please check out our other written movie reviews:

Also, check out our podcast movie reviews within these episodes: